So why is it that a country, where the majority consumes poultry and meat, is considered as the vegetarian capital of the world?

India’s abundant forests, animals, birds and fishes ensured that meat-eating was a widespread practice. Archaeological evidence from the Harappan civilization also points to the consumption of animals. Even animal sacrifices were prevalent.

However, due to the spread of Jainism and the teachings of Buddha, vegetarianism became more common, with Hindu communities too turning to vegetarianism. Yet, other than upper castes, a large population continued eating meat.

Yet now, with a huge population that is verifiably non-vegetarian, for the West, India continues to be a place of strict vegetarianism.

A lot of it has to do with the fact that government data shows that vegetarian households are more affluent and have a higher income, which is how the ‘vegetarian stereotype’ is more likely to take over people’s minds. 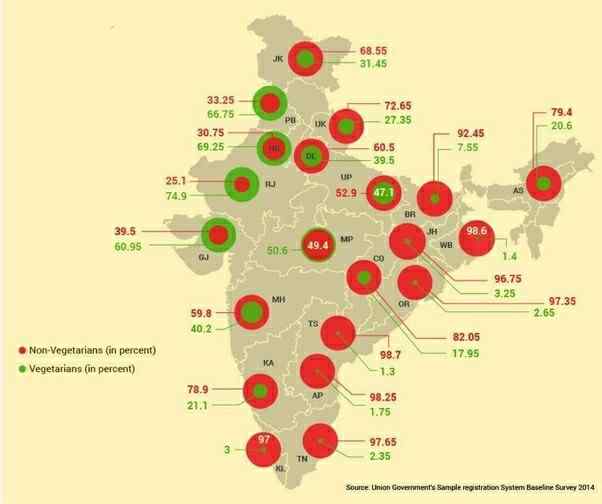 “This power to represent communities, regions, or even the entire country is what makes the stereotypes. The term non-vegetarian is a good case in point. It signals the social power of vegetarian classes, including their power to classify foods, to create a ‘food hierarchy’ wherein vegetarian food is the default and is having a higher status than meat. Thus it is akin to the term ‘non-whites’ coined by ‘whites’ to capture an incredibly diverse population who they colonised,” said anthropologist Balmurli Natrajan and economist Suraj Jacob.

The survey also noted that meat and egg consumption increases with increasing household income, however, the richest 20% of Indians consume slightly less meat and eggs, bucking the trend.

The young state of Telangana has the highest percentage of non-vegetarians with 98.7% of the population consuming meat. West Bengal (98.55%) and Andhra Pradesh (98.25%) follow closely. 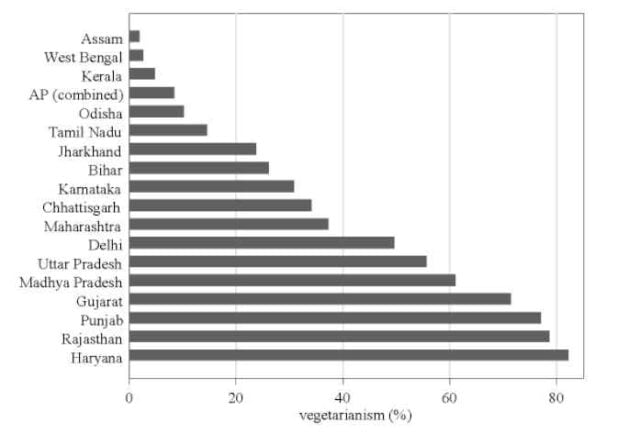 Meanwhile, Rajasthan, Haryana and Punjab are states with the lowest percentage of non-vegetarians.

While surveys have identified that India has a small vegetarian population, the weekly and daily eating habits of most Indians stray away from non-vegetarianism. 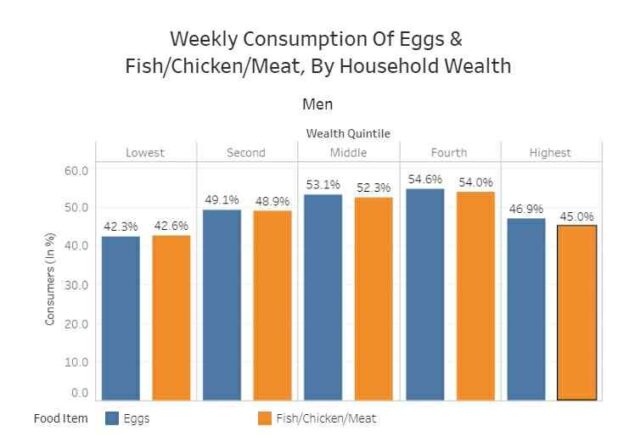 According to the National Family Health Survey, barely 6% of the population eats meat on a daily basis, and nearly 40% on a weekly basis, thus showing that regular meat-eating Indians are relatively less. 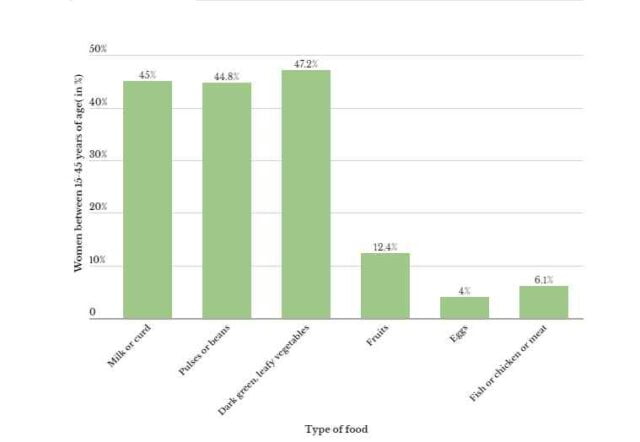 India has a violent history of mob lynching and social ostracization of people who consume beef because a cow is considered to be sacred in Hinduism. India’s ruling party, BJP, does not hide its inclination towards vegetarianism. Food choices have become very much political.

In such a nation, the consumption of beef is not as high as in western countries.

A reported 7% of the population eats beef. However, this figure is disputed by many researchers, who claim that the actual statistic is closer to 15% with people unwilling to admit to eating meat due to cultural and religious factors. A 2015 study of urban middle-class Indians found that young people felt “you eat [meat] in secret, away from your family”.

India, with its smorgasbord of cuisines, both vegetarian and non-vegetarian, should not be restricted to an outdated stereotype that is being propelled into people’s consciousness by sheer ignorance.

Numbers don’t lie, so although daily consumption of meat is not an entirely common phenomenon, it is also wrong to assume that vegetables and pulses are all that an average Indian consumes.